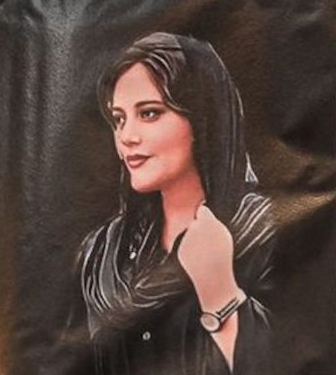 Read all about the Iranian Zan, zendagi, azadi  (Women, life, freedom) revolution!
.
Gino d'Artali
Indept investigative journalist
CLICK HERE ON HOW TO READ ALL PARTS OF THIS SPECIAL DEDICATED TO JHINA MAHSA AMINI AND ALL OTHERS ASSASINATED BY IRAN'S DICTATORSHIP.

Note by Gino d'Artali: The Zan, zendagi, azadi!> (Women, life, freedom) has just started and will only then end when khamenei and his puppets i.e. the morality police and the basijis give way or get lost!!
So Chapter 6 is where the protests continue and I'll continue to inform you about it. That's my pledge.

Jinha
Womens News Center
20 Dec 2022
<<Iran: Female political prisoners call to sing together on Yalda night
News Center - Female political prisoners held in Qarchak Prison located in Varamin released a statement on the Yalda night, a fes-tival celebrated on the night of December 20/21, the longest and darkest night of the year. <Let's sing songs for freedom together on Yalda night,> the statement said. In the statement, the female political prisoners wrote that they would sing songs and chant the slogan <Jin, Jiyan, Azadi (English: Women, Life, Freedom)> on Yalda night and asked all people demanding freedom to <join them in order to overcome this darkness together. A hopeful and warm heart will bring the light of the spring of freedom to the dark and cold nights of winter. Let's sing songs and chant slogans to overcome this darkness together.> >>
Source:
https://jinhaagency1.com/en/actual/iran-female-political-prisoners-call-for-sing-together-on-yalda-night-32477

France 24
20 Dec 2022
<<UN names three women to probe Iran protests crackdown
Geneva (AFP) - The United Nations on Tuesday named three women to lead a rights investigation into Iran's violent crackdown on women-led protests that have rocked the Islamic republic for more than three months. Bangladesh Supreme Court lawyer Sara Hossain, Pakistani law professor Shaheen Sardar Ali and rights activist Viviana Krsticevic from Argentina will be the independent members of the fact-finding mission, UN Human Rights Council head Federico Villegas announced. Hossain, a long-time human rights activist, will chair the investigation, the council presidency added. Iran is highly unlikely to allow the trio to enter the country and carry out their mission, with Tehran fiercely opposing the creation of the international investi-gation that 47 rights council members voted for last month. The three women will document the Iranian authorities' repression of the protests and potential human rights violations with a view to possi-ble legal action against officials in Iran or elsewhere. Mass demonstrations, unprecedented since the 1979 Islamic revolution, have swept across the country since September after the death in custody of Iranian-Kurdish woman Mahsa Amini, leading to violent and sometimes deadly clashes with security forces.>>
Read more here:
https://www.france24.com/en/live-news/20221220-un-names-three-women-to-probe-iran-protests-crackdown
Opinion by Gino d'Artali: this is what I call a victory for the Zan Zendagi Azadi Revolution and in the end justice will prevail.

The Guardian
19 Dec 2022
Martin Chulov and Nechirvan Mando in Erbil
<<Escape from Iran: protesters regroup in Iraq after perilous journey
In late October, Paiman, an Iranian protester from the restive city of Mahabad, lay in a hospital ward, guarded by regime officials who had gunned him down during anti-government demonstrations. Buckshot from a shotgun blast riddled his legs and torso, and blows to his head with wooden clubs had left him dazed and in agony.
Paiman needed treatment, which he was not about to get from a regime where mercy, let alone medicine, has been in short supply since the outset of an uprising that - three months since it began - continues to pose a profound and sustained threat to Iran’s hardline leadership. The 28-year-old veterinarian's fate seemed tied to that of other protesters who had died in the same hospital often two to three days after being admitted. But his brother and cousin had other ideas. <We launched a rescue operation and took him from the bed, then we smuggled him here,> said Paiman's brother, Aso, from a safe house in Erbil in neighbouring Iraq. <It was a four-day journey across the mountains, much of it on horses. It was the toughest thing we have done.> Paiman and his relatives are among the few demonstrators to have made the precarious journey from Iran to the relative safety of Iraq, where some survivors of the violence are trying to regroup. Iraqi Kurdish officials estimate that dozens of protesters have crossed the border. Protesters themselves say the number is likely to be in the low hundreds. Sitting on a floor, covered in a blanket, his skin pallid and his breathing shallow, he described the mounting violence that met the demonstrations in Mahabad, a predominantly Kurdish city in north-eastern Iran that has remained a focus of the clashes - the most serious threat to Iran’s clerical leaders since the revolution that swept them to power 43 years ago.
<Mahsa Amini was a Kurd, it is true,> said Paiman, <but the revo-lution is a popular one, made up of Iranians from all parts of the country. There are Baluchis, Azeris, Persians and others. This is be-cause we are all sick of them and their repression. <Make no mistake, this was a revolution from its earliest days. It was not just protests. The revolutionary current that started this will see it to a finish. They are weak and they are scared of us,> he said of Iranian officials who continue to combat widespread daily shows of dissent with violence. But fear cuts both ways; even in exile, the brothers, who have been joined by a cousin in their rented home in an Erbil suburb, still worry that Iranian officials could reach them.>>
Read more here:
https://www.theguardian.com/world/2022/dec/19/escape-from-iran-protesters-regroup-in-iraq-after-perilous-journey
Opinion by Gino d'Artali: I said it before - khamenei and his axis of evil are fearing more than before that the dictatorship will be toppled.

Womens News Center
19 Dec 2022
<<Iran: 14-year-old girl dies after being raped in custody
News Center - Tens of thousands of people, including children, have been detained and arrested in Iran for participating in anti-regime protests that sparked in Iran and Rojhilat following the killing of Jina Mahsa Amini on September 16. According to the human rights defen-ders in Iran, a 14-year-old girl, who was taken into custody in Tehran for removing her hijab at school, died in custody after being raped by police officers. The human rights defenders said the name of the girl is <Masoumeh> and that she lived in one of the poor neighborhoods of Tehran.>>
Source:
https://jinhaagency1.com/en/actual/iran-14-year-old-girl-dies-after-being-raped-in-custody-32468

France 24
18 Dec 2022
Text by News Wires
<<Iran authorities arrest actress from Oscar-winning movie over protest solidarity
Iranian authorities arrested one of the country's most famous actresses on charges of spreading falsehoods about nationwide protests that grip the country, state media said Saturday. The report by IRNA said Taraneh Alidoosti, star of the Oscar-winning movie <The Salesman,> was detained a week after she made a post on Instagram expressing solidarity with the first man recently executed for crimes allegedly committed during the nationwide protests. IRNA also said several other Iranian celebrities had <been summoned by the judiciary body over publishing provocative content.> It did not say how many or provide further details. According to the report pu-blished on the state media's official Telegram channel, Alidoosti was arrested because she did not provide ’<any documents in line with her claims.> In her post, the 38-year-old actress said: '<His name was Mohsen Shekari. Every international organization who is watch-ing this bloodshed and not taking action, is a disgrace to humanity.>
....
Alidoosti has made at least three posts on her Instagram account expressing solidarity with protesters since the demonstrations broke out in September. Her account, which had some 8 million followers, has been suspended.>>
Read all here:
https://www.france24.com/en/asia-pacific/20221218-iran-authorities-arrest-actress-of-the-oscar-winning-movie-the-salesman

France 24|The Observers
16 Dec 2022
By: Derek Thomson|Alijani Ershad
<<Special report: Iran: Amunition made in France?
An investigation by the FRANCE 24 Observers has provoked a furious reaction from Iranians in Iran and around the world. In an article published November 25, the Observers team published photographs showing 13 shotgun cartridges bearing the logos of Cheddite, a French-Italian ammunition manufacturer, that had been recovered from protests in Iran. The presence of EU-made ammunition in Iran is an apparent violation of a 2011 EU sanction banning the <export, directly or indirectly, [of] equipment which might be used for internal repression> in Iran. The article was massively shared by Iranians on Twitter, Telegram and other social networks. One poster wrote: <Hundreds of Iranians have been blinded by shotgun pellets made by a Franco--Italian company. What does this company doing business with the mullahs' regime have to say about it?> >>
Read all here:
https://observers.france24.com/en/tv-shows/the-observers/20221216-eu-made-ammunition-used-in-iran-repression-iranians-demand-answers

Jinha
Womens News Agency
16 Dec 2022
<<Iran: Kurdish journalist hospitalized after being tortured in custody
News Center- Kurdish journalist Ziba Omidifar was taken into custody by Iran's Revolutionary Guards last week, on December 8. Due to the torture and harassment she was subjected to while she was detained by the Iranian Revolutionary Guards, she has been reportedly transferred to a hospital in Sanandaj. According to the Human Rights Network in Eastern Kurdistan, Kurdish journalist Ziba Omidifar was transferred to the hospital yesterday, On December 15, after she lost consciousness. The human rights network also reported that the journalist was subjected to torture and harassment in custo-dy and that her health condition deteriorated on Wednesday.
58 journalists arrested
In Iran, at least 58 journalists have been arrested since the protests that sparked in the country following the killing of Jina Mahsa Amini, according to the International Federation of Journalists (IFJ).>>
Source:
https://jinhaagency1.com/en/actual/iran-kurdish-journalist-hospitalized-after-being-tortured-in-custody-32464

France 24
16 Dec 2022
By Lou Romeo
<<Lack of leadership is both a strength and weakness of Iran's protest movement>>
Source:
https://www.france24.com/en/middle-east/20221216-ni
and video (07.23 min.)
Opinion by Gino d'Artali: this is a must read and learn article to be able to strenghten the Zan, Zendagi, Azadi revolution. Death to the dictator!